Following the release of ARR2019, Melbourne Water and DELWP commissioned a study to benchmark the performance of ARR2019 in the state of Victoria. Below is the executive summary of that report, otherwise view the full text.

Whilst considerable effort was expended in developing the new Australian Rainfall and Runoff (ARR) 2019 guidance, there was limited opportunity for benchmarking how the different combinations of design inputs impacted on the design flood estimates. After the release of ARR2019, studies were undertaken which demonstrated that rainfall-based design flood estimates in some regions of Australia using ARR2019 procedures tended to underestimate gauged flood frequency analysis estimates. As a result, Melbourne Water and DELWP commissioned a study to determine whether there was systematic bias in design flood estimates for Victorian catchments using the ARR2019 techniques and data sets.

A total of 25 catchments were identified across Victoria with calibrated flood event (RORB) models and a relatively reliable record of streamflow data. Within each catchment, the recorded streamflow data at each of the adopted gauge sites was used to derive at-site flood frequency curves for AEPs between 10% and 1%. These frequency analyses were used to compare the design flood estimates obtained using regional data from the ARR Data Hub.

The outcome of this assessment indicated that the use of the standard ARR2019 design inputs for Victoria is likely to result in an underestimate of design flood peak flow in the majority of catchments. That is, if regional design information is relied upon without undertaking any local calibration then the resulting design flood estimates are likely to be lower than actual.

This project also tested the variability in flood estimates resulting from three different applications of pre-burst rainfall. The applications considered the adoption of:

The results indicated that up to the 1% AEP, the modelled peak flow quantiles were largely invariant to the pre-burst method adopted. Conceptually, use of a pre-burst ratio rather than absolute depth approach is preferred, particularly when the focus of the study is on AEPs rarer than 1%.

Preliminary investigations were trialled using three approaches to correct the bias observed in the design flood estimates for Victorian catchments. These investigations highlighted that there were regional differences in loss estimates corresponding to the four different hydroclimatic groupings (or "loss regions") used in ARR2019 to derive the underlying prediction equations. In particular, significant differences in loss values and benchmarking results were observed for those catchments which were close to or covered the boundary between loss regions. The spatial extent of the different loss regions used in ARR2019 for Victoria are shown in Figure 1, or click here to view the interactive map. 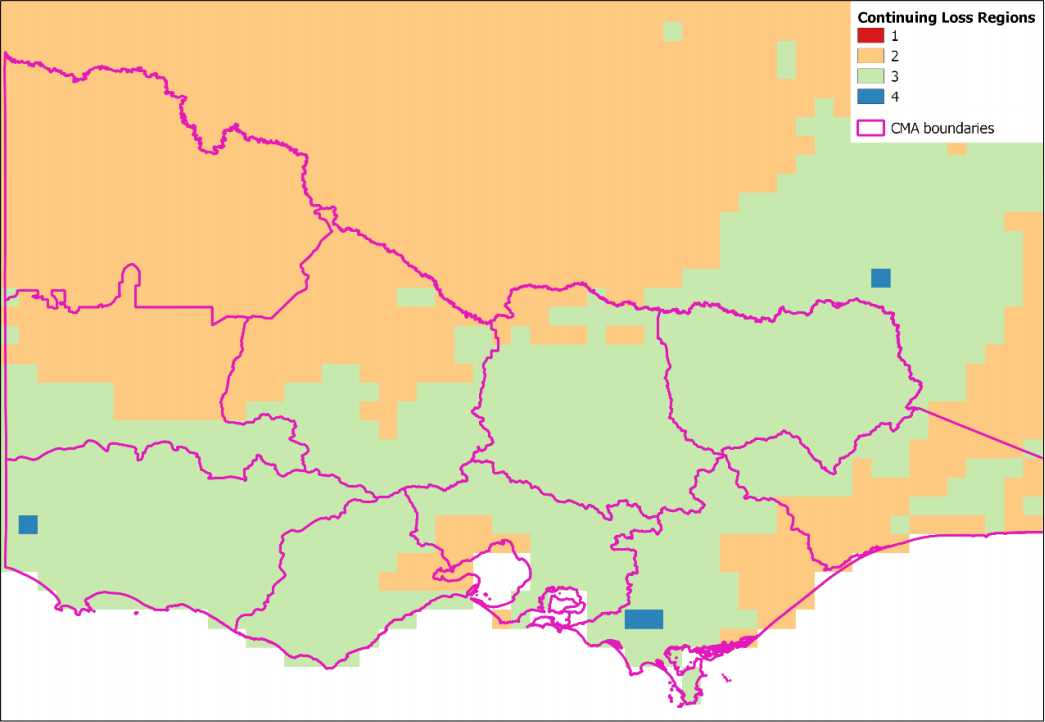 As the majority of catchments selected for this study were influenced by loss region 3, catchments within the influence of loss regions outside of region 3 were excluded from analysis. This resulted in recommendations only being applicable to catchments that lie within loss region 3.

On the basis of the investigations described in this report, it is recommended flood estimates obtained using ARR2019 Data Hub regional information should be derived using the 75th percentile pre-burst rainfall (in lieu of the median value) in combination with unmodified Data Hub values of initial and continuing loss. Given the distribution of catchments considered, this recommendation is only supported by information obtained for catchments within loss region 3.

In line with AR2019 recommendations (Section 3.3.3 of Book 5; Section 5 of Book 7), it is stressed that flood estimates are best derived using information local to the specific catchment of interest. A variety of approaches are available, and loss estimates can be obtained by one or more of the following approaches:

The above methods are listed in notional order of defensibility, where the first approach is the most preferred and the sixth method is the least preferred. However, for any given catchment the defensibility of the adopted approach varies with the relevance of the available data, where it is commonly necessary to make assumptions about how estimates might vary with catchment size, event severity, and the hydrologic similarity of catchment conditions. It is thus recommended that more than one approach be applied and that careful judgement be used to derive a single set of best estimates.